COSTA MESA, Calif. – Los Angeles Chargers safety Derwin James Jr. jogged onto the practice field as the Sir Charles Jones end-of-the-week anthem, “Friday,” blared from the speakers.
James and the Bolts appeared to be going through the routine motions of a final practice before game day, but a quick double-take revealed something entirely unique.
Under James’ No. 3 practice jersey popped a collared shirt.
“It’s Business Friday!” James explained, smiling. “You got to come out ready for business.”
Joining James in wearing the unusual practice attire has been defensive lineman Sebastian Joseph-Day and wide receivers Keenan Allen and Mike Williams, although Williams’ time wearing a polo was short-lived.
“I didn’t like how I played [that Sunday],” Williams said. “So that was the end of that.”
“It would be hard not to notice it,” head coach Brandon Staley said, grinning, about the movement, born in Week 1 by James and Allen with an open invitation to all others wishing to join. 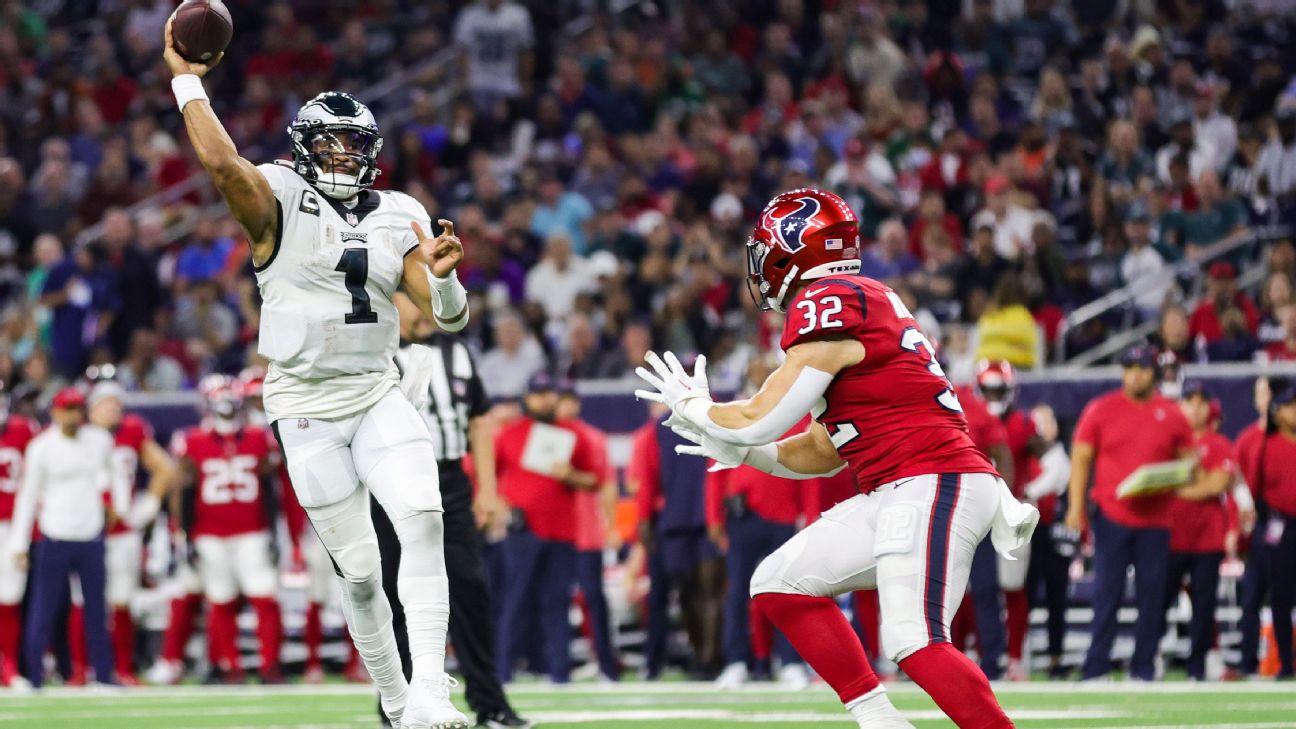 &#8226 Could the Eagles go 17-0?
&#8226 Why Diggs trade was a win-win
&#8226 How McVay is coping with adversity
&#8226 Hackett, Russ and wristbands
&#8226 Chargers have fun Friday tradition
&#8226 3 ways Justin Fields is improving
“It’s a little joke being about our business, taking care of the little things and staying focused,” said Joseph-Day, a team captain along with James and six others. “But also bringing some fun to it.”
The Chargers are 5-3 and on pace to earn their second playoff berth in nine seasons as they prepare for a matchup against the 4-4 San Francisco 49ers at Levi’s Stadium on “Sunday Night Football” (NBC, 8:20 p.m. ET).
Business Friday has helped translate to some Sunday success, but perhaps more than anything, it’s provided some levity through what has already been a nine-week rollercoaster, and into what can feel like a long 18-week — and potentially longer — season.
“You got to find those celebrations, whether it’s dressing up or something within having to play the game of football that you got to find time to have fun because it’s hard, it’s long,” said James, who became the NFL’s highest-paid safety over the offseason by signing a four-year, $76.5 million extension. “You lose guys throughout the season with injuries and stuff, so you just got to have ways to have fun.”
The Chargers have suffered an inordinate number of injuries, placing starting edge rusher Joey Bosa, cornerback J.C. Jackson, and left tackle Rashawn Slater on injured reserve. Defensive lineman Austin Johnson is expected to also join the IR list after suffering a season-ending knee injury last Sunday. Several other players, including Allen, Williams, and kicker Dustin Hopkins have or will miss multiple games due to injury.
None of which has helped the Bolts find much-needed consistency on the field.
The offense has flashed but otherwise has been unable to repeat the success it found in 2021. Despite a recent burst of touchdowns from running back Austin Ekeler, who has scored a league-leading 10 touchdowns over the last five games, the offense ranks 18th overall in efficiency and is averaging 22.75 points per game (ranks 11th).
Quarterback Justin Herbert, playing through fractured rib cartilage since the end of a Week 2 loss to the Kansas City Chiefs, has passed for 13 touchdowns (t-ninth) with five interceptions (t-13th).
The defense, despite adding Joseph-Day and edge rusher Khalil Mack over the offseason, has underwhelmed and ranks 22nd in efficiency, while allowing 25.75 points per game and a league-worst 5.71 yards per carry.
Nevertheless, the Bolts still find themselves in position to earn a wild-card playoff spot.
“After seven games you get a real accurate picture of the fight in your football team and then you’ve had to experience all these things that most people experience in a full season,” Staley said after a 20-17 win over the Atlanta Falcons in Week 9 that required a game-winning field goal from rookie kicker Cameron Dicker.
“We haven’t performed to our capacity yet, that’s an exciting thing because we know what is in front of us and we know what we have had to absorb and now we know where we need to go and how to get there.”
Part of that journey is developing camaraderie and chemistry with teammates.
“When your guys are doing things like that, that means they like each other,” Staley said. “We’re going to need all of that, the brotherhood and our culture coming to life to play winning football down the stretch here.”
Though for some, business attire during practice doesn’t seem to be the way to go.
“I don’t know why they do that s—,” said Mack, a perplexed look on the ninth-year pro’s face.
When asked whether he’s seen – and would consider joining – the movement, it seemed a step too far for the often-serious Herbert.
“I would probably just say that I’m doing my best to go out and take care of business on Friday. Maybe that is something we can address later, but not as of now,” he said.
But for James, Joseph-Day and Allen, they intend to move forward with “Business Friday” in full effect.
“People always laugh when they see me in it,” Joseph-Day said. “It’s just a lighthearted mindset even though you know you’re serious because it’s a serious thing.”
“I’m going to continue to do it. I don’t care who does it,” said James, noting that polos are available via the equipment staff. “I feel like I’ve been playing fine doing it, so just keep doing it.”