Another Mars robot is settling in for a long, long sleep.
With dust caking its solar panels, InSight has been losing the ability to recharge for months — in the spring, it was operating at just one-tenth of its landing power. Now the thick layers of dust might have doomed InSight for good. NASA announced on December 19 that its InSight lander had not responded to communications from Earth, and “it’s assumed InSight may have reached its end of operations.” (Update: on December 21, NASA wrote an official farewell post.)
InSight, short for Interior Exploration using Seismic Investigations, Geodesy, and Heat Transport, landed on Mars on November 26, 2018. Its mission was to study the interior structure and composition of Mars over a period of 709 Martian sols (local Martian days), or 728 Earth days, primarily through seismographic recordings. Like many of NASA’s other Mars robots, the lander has far exceeded the planned mission duration — as of December 20, 1,445 sols have elapsed.
InSight’s demise by dust was not unexpected. Because of space and weight considerations, the lander was not equipped with dust-removing instruments, relying upon the capricious Martian wind to clean its solar panels. 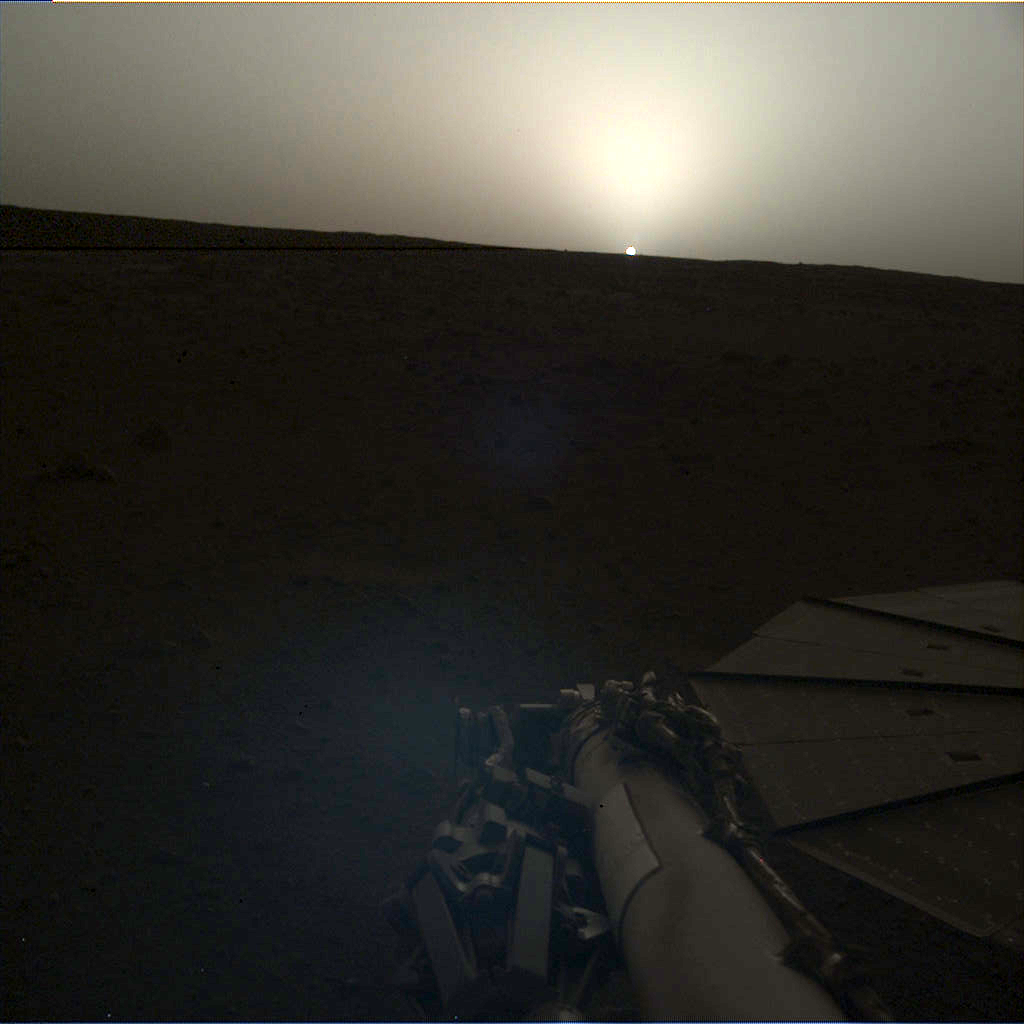 InSight took this photograph of a Martian sunset on April 25, 2019. Image Credits: NASA/JPL-Caltech

InSight took this photograph of a Martian sunset on April 25, 2019. Image Credits: NASA/JPL-Caltech
In an April 25, 2022, press release announcing the extension of eight planetary science missions, including InSight, NASA wrote of the Mars lander: “The extended mission will continue InSight’s seismic and weather monitoring if the spacecraft remains healthy. However, due to dust accumulation on its solar panels, InSight’s electrical power production is low, and the mission is unlikely to continue operations for the duration of its current extended mission unless its solar panels are cleared by a passing ‘dust devil’ in Mars’ atmosphere.”
Less than a month after extending InSight’s mission, NASA announced the anticipated timeline of the lander’s slowdown and eventual end of mission: December 2022, a very accurate prediction. “InSight has transformed our understanding of the interiors of rocky planets and set the stage for future missions,” Lori Glaze, director of NASA’s Planetary Science Division, said in the press release. “We can apply what we’ve learned about Mars’ inner structure to Earth, the Moon, Venus, and even rocky planets in other solar systems.”
Because power levels were so low this summer, the InSight team turned off all science instruments except for its seismometer, which collected data through at least October 22, 2022.
NASA intends to attempt to contact InSight again, but if the lander misses two consecutive communications, the team will officially declare the end of mission. “After that, NASA’s Deep Space Network will listen for a time, just in case,” wrote NASA in a November 1 statement.
Before we say our last goodbyes to the lander — you can even send a virtual postcard to InSight and its team to celebrate their success — we’re taking a look back at the mission’s highlights.
When InSight launched atop an Atlas V rocket on May 5, 2018, there were two other robots onboard: CubeSats nicknamed “WALL-E” and “EVE.” Part of the Mars Cube One (MarCO) mission, these briefcase-sized satellites demonstrated the ability of CubeSats to survive deep space. They successfully relayed data from InSight as it landed on Mars back to Earth, then ceased contact shortly after. 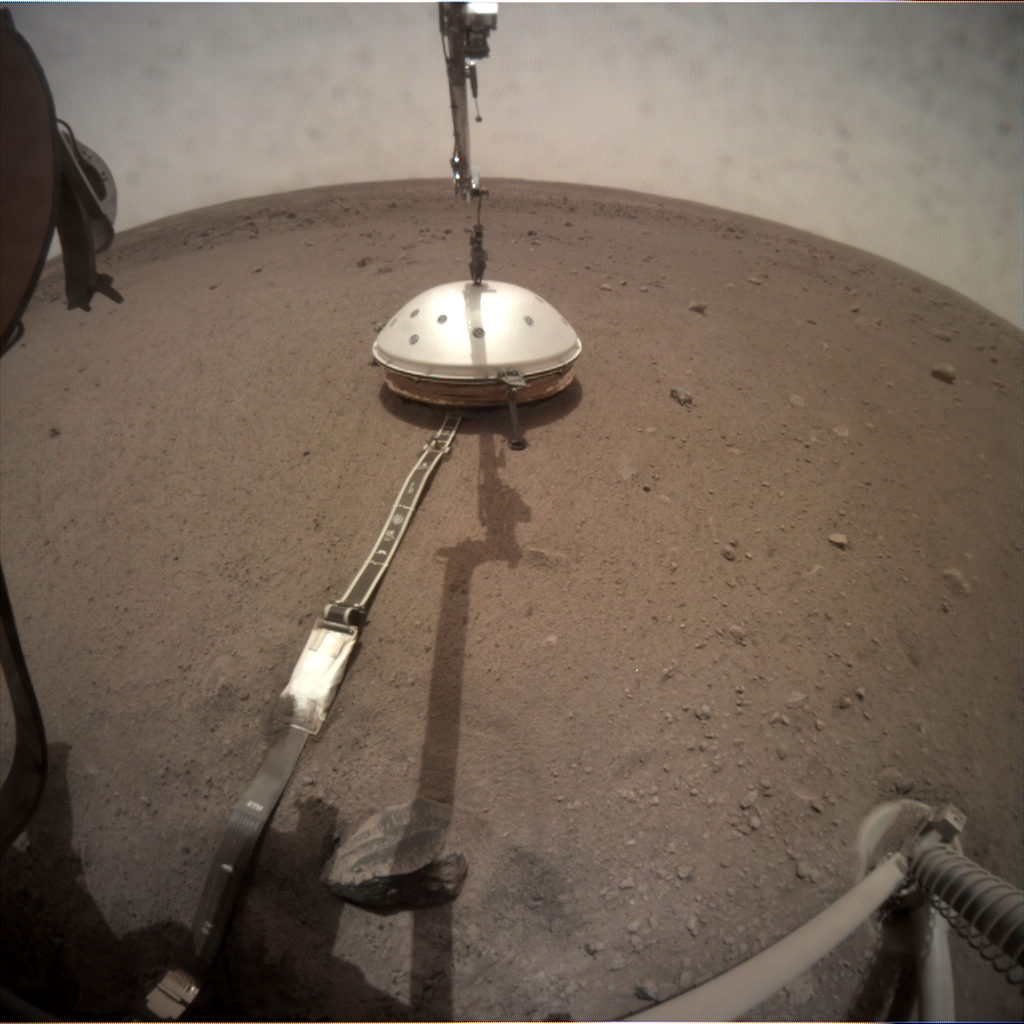 InSight’s seismometer sits beneath a wind and thermal shield. Image Credits: NASA/JPL-Caltech
Shortly after landing, InSight collected what its researchers called an “unplanned treat”: using the lander as a giant microphone to listen to the sound of the Martian surface. It’s very quiet (as expected in a thin atmosphere) and mostly just wind (also as expected), but it was thrilling just to hear the surface of another world. Since then we’ve also heard recordings made by the Perseverance rover of the Ingenuity helicopter. You can listen to the InSight-captured wind below:

On April 6, 2019, InSight took the first-ever recording of a marsquake — the Mars version of an earthquake — using its Seismic Experiment for Interior Structure (SEIS) instrument. Since then, it’s measured more than 1,300 marsquakes, including a magnitude 5 temblor on May 4, 2022, which is the largest ever recorded. In studying the marsquake, researchers have established the composition of Mars’ interior to include 12 to 23 miles (20 to 37 kilometers) of crust, a 969-mile-thick (1,560-kilometer-thick) mantle, and a molten core with a radius of 1,137 miles (1,830 kilometers). Useful if we ever plan on doing any mining operations there.
InSight carried the first magnetometer to Mars, using it to study rocks both at the surface and several miles beneath it. In them, it discovered traces of the planet’s former magnetic field, which no longer exists. Those rocks demonstrated powerful magnetism, some 10 times stronger than scientists expected based on previous satellite data.
Insight also served as a little Martian weather station, recording all kinds of atmospheric phenomena. It took the first audio recording of Martian wind on December 1, 2018, and it recorded numerous pressure drops from passing “dust devils,” or whirlwinds. The public could even read InSight’s daily weather reports, which were published online until October 25, 2020. 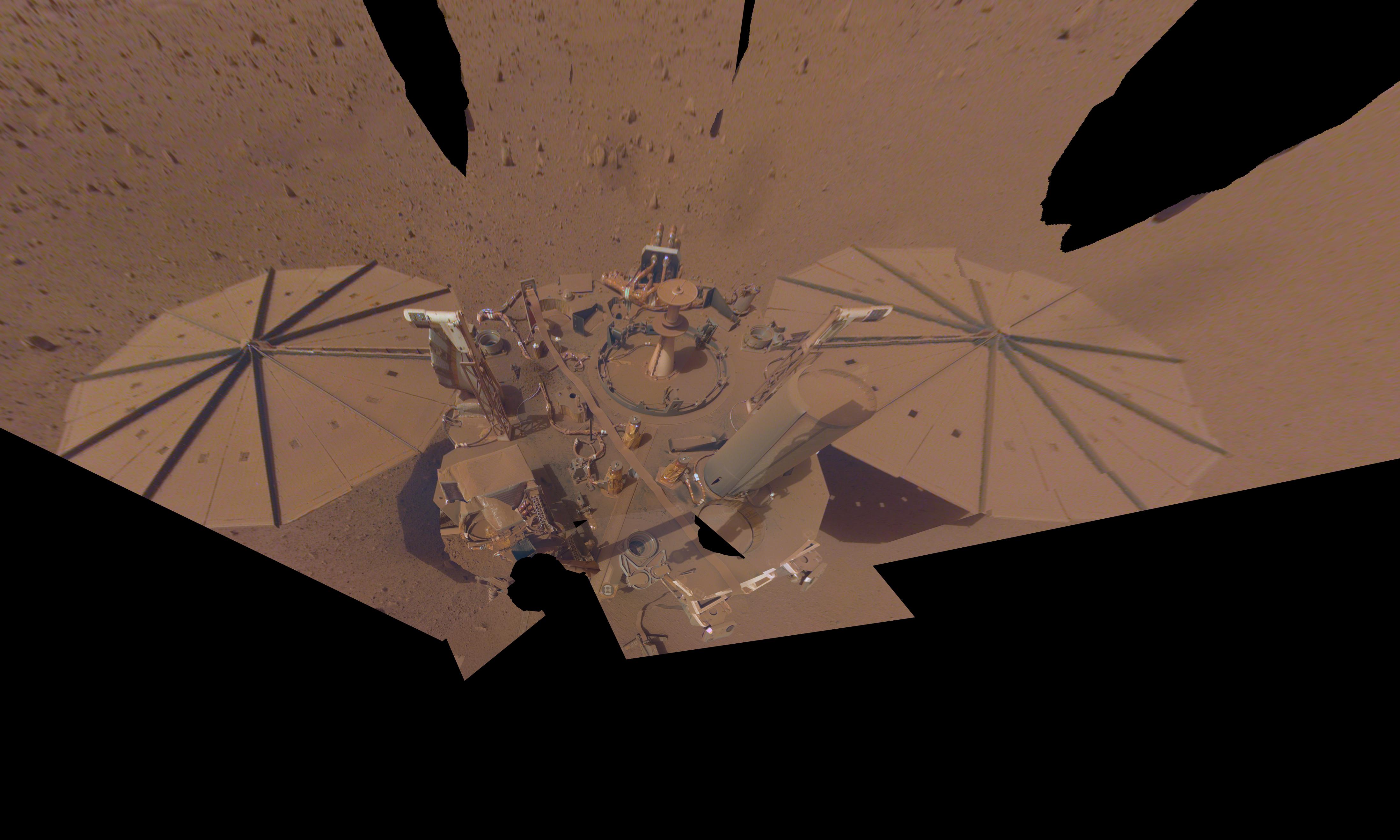 InSight’s final selfie shows a thick layer of dust on its solar panels. Image Credits: NASA/JPL-Caltech
Even though InSight was operating at extremely low power levels due to the dust accumulations on its solar panels, the lander continued to monitor Mars’ seismic activity throughout the summer and into the fall. The SEIS instrument was the last operational instrument on the lander, collecting data through at least October 22. From that date, InSight still had enough power to continue communications with Earth, but now it has gone silent.
“The lander’s power has been declining for months, as expected, and it’s assumed InSight may have reached its end of operations,” wrote NASA in an update.
On December 19, a NASA Twitter account for the lander posted what might be the robot’s last photograph with the following message: “My power’s really low, so this may be the last image I can send. Don’t worry about me though: my time here has been both productive and serene. If I can keep talking to my mission team, I will — but I’ll be signing off here soon. Thanks for staying with me.”
After two or three decades of collecting more and more dust, perhaps InSight will once again meet humans as astronauts land on Mars.

10 best clips of all time from Minecraft Championships (MCC) - Sportskeeda

A New Perspective on Healthy Eating, According to Maya Feller, RDN – Martha Stewart