Google, DuckDuckGo and other search engines help you find information from the web. But it’s hard to find documents, messages, meetings and emails from your own accounts. You need to go to different applications to find things that might be related to one project. A Y Combinator-backed app called Needl is helping users with that.
Needl is a cross-platform application that lets you search across your local file system and accounts like Gmail, Google Drive, Google Calendar, Notion and Slack. The free version — available on the web, Windows and Mac — lets you connect a single account per integration. If you need more account connections and integrations like Jira and Linear, you will need to pay $10 per month.
The application is simple to set up and use: Once you install it on your system, it will ask you to connect your Google, Slack and Notion accounts. Once that’s done, you can search for files, events, emails and other things across all these accounts and your local file system. You can filter these results by files, messages, events, tasks and emails. 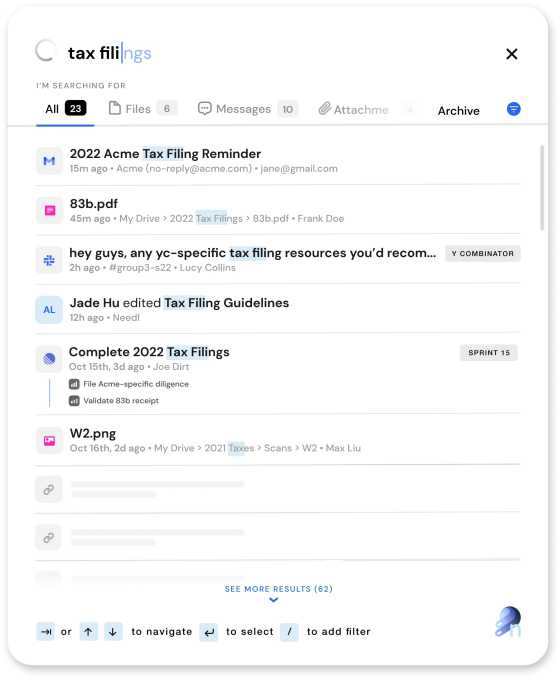 Image Credits: Needl
If you’re a keyboard ninja, the app has handy shortcuts for you to launch the interface and navigate around. Users can customize shortcuts to launch the app and jump to the home view. The default view on the app shows the Activity Feed, which will show you contextual information on different apps such as your upcoming meeting.
Needl founders Max Keenan, Angela Liu and James Liu are all University of Chicago alums and met at a hackathon. They worked on a few side projects like a tool to write essays using GPT-2 and a TikTok for blog posts. After university, Max Keenan was in investment banking at Moelis while Angela Liu and James Liu joined Microsoft.
The trio said that they had to become organized once they joined their jobs and meticulously follow naming systems and folder structures to easily find info. They wanted to solve this problem of constantly and manually reorganizing information through search.
“We were looking for a problem that historically had never been solved, but improvements in language models would be able to solve. As we were onboarding virtually during the pandemic, it hit us right in the face — information was siloed across all of these different platforms and we could improve the search and discovery of info,” Keenan said in an email conversation with TechCrunch. 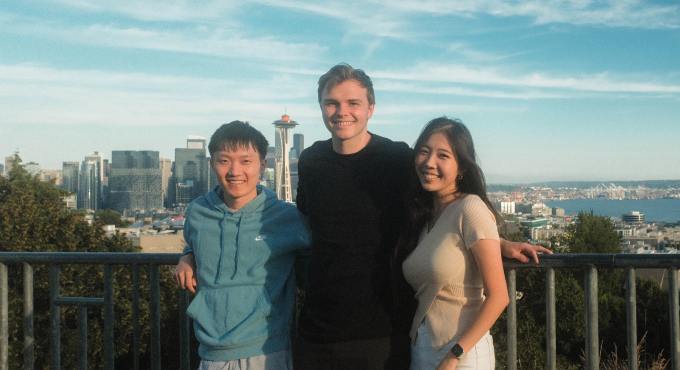 Image Credits: Needl
The Needl team wrote the first line of code in June when it was in the Y Combinator’s Summer 2022 cohort. The company has raised $2.5 million from various investors including Fuse, Y Combinator, Palm Drive Capital, Liquid 2 Ventures, Collin Wallace and Nathan Wenzel.
The company rolled out the product under a closed beta to around 200 users in August. Now the company is making it available to everyone under public beta.
Keenan said the company wants to focus on improving its contextual and semantic search through large language models (LLM) over the next 12 months. Plus, the startup wants to add more premium integrations like Asana, HubSpot and Salesforce.
The startup considers Glean, a startup powering enterprise search across apps, as one of its major competitors. In May, Glean raised $100 million in its Series C funding round led by Sequoia with participation from Lightspeed, General Catalyst, Kleiner Perkins and the Slack Fund at a $1 billion valuation post-money.
Keenan said that a major differentiation between Glean and Needl is the shorter set-up time for the latter.
“Biggest difference from Glean is that our product is self-serve and can be set up in under 2 mins by anyone, regardless of company size. Glean sells through sales-led processes that require full company adoption, can take months, and are inaccessible to individuals or small teams,” he said.
Neeva, a search engine built by a former Google ad exec, also offers search features through app integrations. However, it is available only in the U.S. with European expansion underway.

Google is shutting down Stadia and offering refunds - Ghacks