Tines, a no-code automation platform aimed at security teams, today announced that it raised $55 million in an extended Series B round led by Felicis, bringing the startup’s total raised to $96.2 million. CEO Eoin Hinchy says that the new capital, which values Tines at “north of” $300 million, will support the company’s go-to-market and R&D efforts, partnerships outreach and hiring.
‘We founded Tines in 2018 to solve the problem of too much work, not enough staff, and inevitable incidents,” Hinchy told TechCrunch in an email interview. “[W]e realized there had to be a better way to handle our security needs. None of the existing security orchestration, automation, and response (SOAR) solutions we encountered could solve our problems; they were too clunky, rigid, and brittle, so we built our own.”
Prior to co-launching Tines, Hinchy was a forensics specialist at Deloitte, a senior information security engineer at eBay and the senior director of cybersecurity at DocuSign. Thomas Kinsella, Tines’ other co-founder, coincidentally also held security-related roles at Deloitte, eBay and DocuSign, albeit on a different hiring timeline.
Dublin-based Tines competes with well-established vendors like Palo Alto Networks and Splunk, as well as legacy SOAR tools such as Swimlane and Google-owned Siemplify. But Hinchy claims that Tines takes a different approach than most to securing enterprise systems, doubling down on automation.
But, you might ask in response, what about no-code security automation platforms such as Torq and Sym, which help companies automate routing workflows across their security products? Hinchy makes the case that Tines is both more user friendly and more capable thanks to the scope of its integrations.
“As a no-code platform, anyone can learn to automate their workflows independently with Tines in just a few hours — this has the knock-on effect of freeing up developers and engineers for more critical projects,” Hinchy said. “Tines is also vendor-agnostic; it can connect with any API-driven tool or application in minutes, offering an unrivaled level of interoperability across the enterprise.”
Tines is a little like IFTTT for cybersecurity teams. Using the platform, customers can build automations with a drag-and-drop interface that trigger steps in response to events like data breaches or changes to a GitHub repository. These steps range from basic, such as automatically sending a Slack message, to more sophisticated, like performing a codebase backup. 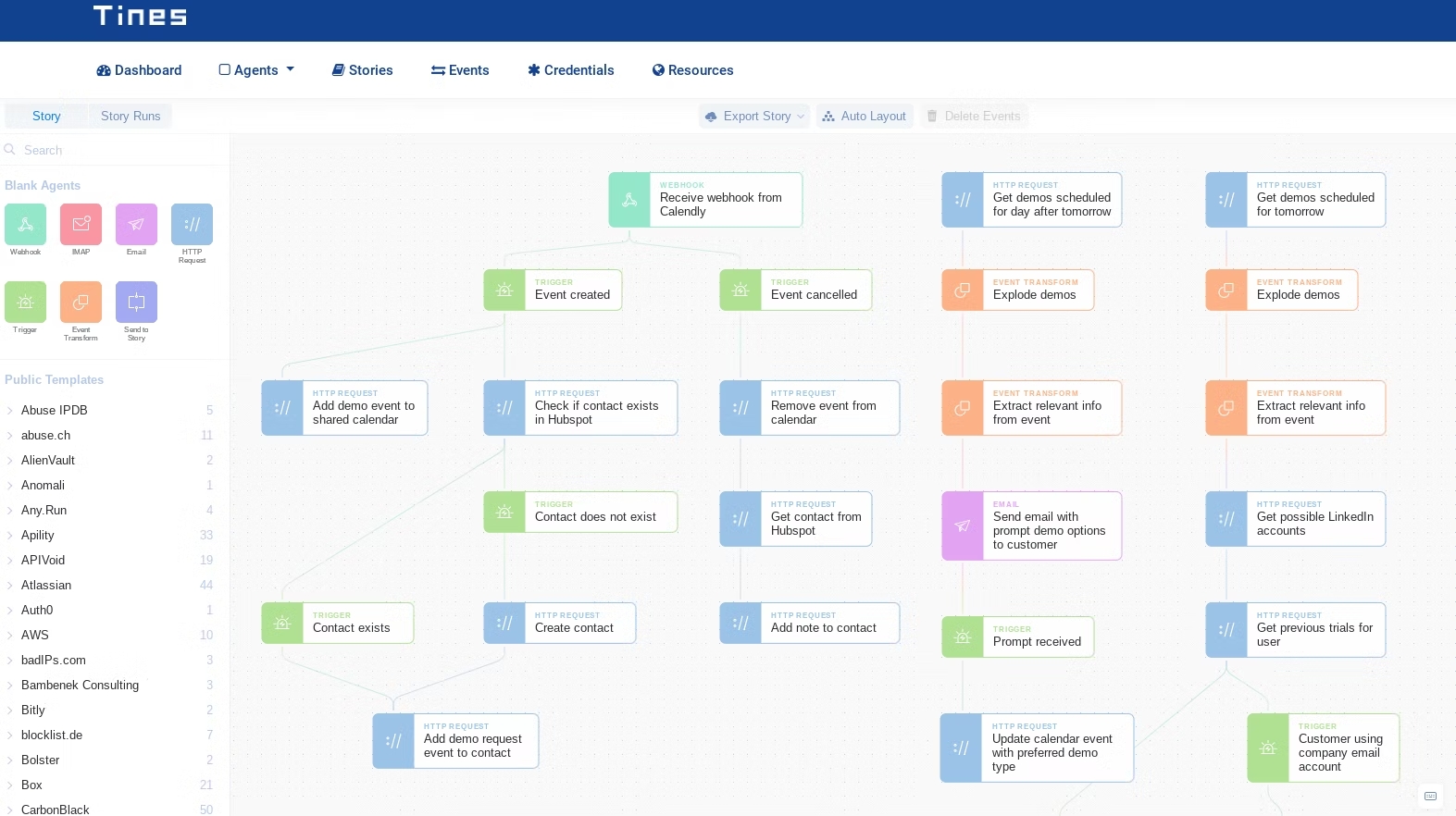 Automating workflows using Tines. Image Credits: Tines
Data that resides in other systems flows through Tines; customers can control data retention within Tines, for example automatically purging it after a few minutes. The platform lassos tools together through a combination of automation, APIs and integrations, enabling both security-focused and broader capabilities like phishing response, endpoint detection and managing help desk tickets.
The Tines Story Library — recently launched — provides a collection of workflow automations for building chatbots, case management systems and more that can be customized and connected to existing tools. Hinchy notes that it (like the rest of the Tines platform) can run in the cloud or on-premises, giving greater flexibility to companies in regulated industries.
“Our customers range from Fortune 500s to 50-people start-ups and include McKesson, Canva, Databricks, MongoDB, Kayak, Elastic, Auth0 and Gitlab,” Hinchy said, when asked about Tines’ customer makeup. “We’ve also had approximately 10,000 users sign-up for the free, community edition of Tines.”
In a sign that the demand for security automation is robust, Tines revenue has increased 4x since April 2021, Hinchy claims. Without revealing concrete figures, he said that revenue has tripled each year for the last two years and is on track to triple again this year.
No doubt, the no-code element of Tines is appealing to companies suffering from skills gaps and high levels of turnover among their security ranks. According to a February survey released by ThreatConnect, 50% of businesses had gaps in basic, technical IT security skills and 32% of IT managers were considering quitting their jobs in the next six months.
No-code vendors more broadly are enjoying ample time in the spotlight as investors place bets on a citizen developer revolution. In 2021, VC investments in low- and no-code platforms experienced a 5x uptick in 2021, according to GlobalData, reaching over $2 billion across 80 deals.
“For a security team to be effective, they need to be able to detect vulnerabilities and repair them before they’re exploited and have a good instinct when chewing over potential threats. This means you’re constantly on high alert, and security operations center teams are burned out,” Hinchy said. “This results in more human error and higher turnover rates — something organizations can’t risk in a time when so few security professionals are coming through the pipeline … At Tines, we’re dedicated to empowering security teams to do their best work by delivering powerful automation into the hands of those already doing the work manually.”
By the end of the year, Hinchy says that Tines’ headcount will stand at over 180 — up from 150 today. Hiring will be spread across the company’s Dublin HQ and Boston, where the company recently opened an office.